The Red Mass has as its purpose invoking God’s blessings on those responsible
for the administration of justice as well as on all public officials.  It is
celebrated in honor of the Holy Spirit as the source of wisdom, understanding,
counsel, and fortitude, all gifts that shine forth preeminently in the
dispensing of justice in the courtroom as well as in the individual lawyer's
office.

Originating centuries ago in Paris, London, and Rome, the Red Mass derived its
name from the scarlet robes worn by the royal judges attending the Mass and the
traditional red color of the vestments worn by the celebrant, representing the
tongues of fire symbolizing the presence of the Holy Spirit.

The first recorded Red Mass was celebrated in the year 1245 in Paris for the
Bench and Bar.  During the reign of Louis IX (Saint Louis of France), La Sainte
Chapelle in Paris was designated as the chapel for the Mass.  Today the chapel
serves as a museum but remains the site of the annual Messe Rouge.  In London,
the Red Mass was first celebrated in 1310 during the reign of Edward I.  In
Rome, the Red Mass historically marked the official opening of the judicial year
of the Sacred Roman Rota, the Tribunal of the Holy See.

In 1958, the St. Thomas More Lawyers Society of Wisconsin celebrated its first
Red Mass.  In the succeeding years, the Red Mass has grown to become the
ceremonial highlight of the Society’s activities.  Attendees of the Mass include
members of the judiciary, civic leaders, lawyers, law school deans, law
professors, and students of law. 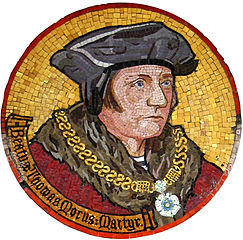